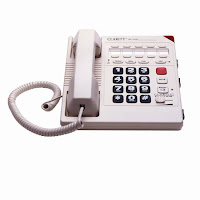 Late last night we got a random call on our land line phone.  It was a sound that I'd long forgotten.  It almost gave me a heart attack.  I picked up the receiver gingerly.  It was after ten and a very crackly line.
'Just calling to check your phone line is working.'  The man on the other end said, apparently a million miles away.
'Wow' I said.  'Thanks!' and put the receiver down, bemused.
You see, we've had no phone line since last year.  Apparently the cable was stolen from the road for the umpteenth time and the Kenya Telkom technicians just gave up replacing it.
'It will just get stolen again.' They said when I asked the first time. 'We'll have to find another route for it, but for now, it's useless.'
These words gave me a clue that getting a telephone line back was going to be a long haul.

After 8 months of paying (admittedly small) phone bills for a line we didn't have, I once again braved our local Telkom offices a week or so ago, just for old times sake, to enquire about progress.

'Ah! We are getting a new cable for you next week!'
I've heard all this before and hardly believed him.
'Are you?' I said wearily.
'Yes, and this time it cannot be stolen!'  The man said with such conviction.  I had to admire his enthusiasm.  My ears pricked up vaguely.
'Really?'
'Yes,' he said, 'we have a secret way of ensuring that the copper wire is not stolen this time.'
Now I was interested.  He went on:
'But I cannot tell you what that is, or else it won't be a secret for very long.'


A day or two later I got a phone call from my husband who was in the office.
'Do we really have to continue paying these silly phone bills?' he said.
'Apparently we will be getting our phone line back next week,' I replied, 'but how they're going to do it is top secret...'
Sure enough, and somewhat promisingly, there were indeed men wearing 'Orange Telkom' overalls on the road outside our house for a couple of days.  I didn't dare hope that they were fixing our line because recently there's always been someone or other digging up the road or scaling telegraph poles - looking impressively busy.
Now it seems that miracles really do happen!  However, since we've got our phone line back, to be honest, I'm not really sure what to do with it.
Years ago I used the land line for my internet connection (this was an extremely stressful time as you can appreciate - nearly went grey in the process!).  Now it's a different story.  Kenya trail blazing!  It's now criss crossed by fibre optic cables, at home we have installed wireless/broadband, our mobile phones can dial internationally (Zain have just put their rates right down causing a local price war between them and their competitors Safaricom) and we've got Skype on the computer to chat with family and friends back home - face to face!   In fact we have little use for an old fashioned crackly phone line.
Last year, when we did have one, most of the phone calls were actually for Gladys, Florence or Shadrack - I acted as something like an on-hand receptionist, bellowing out their names from my office upstairs.  'Simu!'
Not that I'm complaining mind you, I just must remember to use it from time to time!  If anyone else's landline is working that is....
Read more about the trials of Africa expat wife, 'keeping in touch' here:
http://www.home.co.ke/index.php/african-expat/116-columns/478-keeping-in-touch


p.s.  Just this minute got a personal visit from Njage, from Kenya Telkom in a smart new pick-up.  He was sitting in his car.  I walked over.

'You are from the phone offices - thank you so much for reconnecting us!'
'Well,' he smiled, 'You were making very much noise so we decided to pull the line from very far to get you reconnected.  It was very difficult.'
'Oh.' I said. 'well, now you mention it, the line is a bit crackly.  Do you want to come and listen?'
'Will your dogs attack me?'
'No, they're fine. Karibu!' I said.

Njarge got out of the car.
'As I said, you were coming to our offices making much, much noise about your phone line so we wanted to fix it especially to you ..... oh, and we also wanted to run the new line to your neighbour who is PS to the President.  He is a very important man.  In your country, he would be advisor to Cameron.'

'Aaah!' I said.  The situation was becoming clearer.  After all, I didn't remember making THAT much of a fuss.

We tested the line.  Funnily enough, it was dead.
'I must fix this for you.' Njage said, smiling again from my revolving office chair.
'You are driving a very nice car!' I said, making conversation. 'Is it a gift from Orange?'
'Yes,' he said, 'we are working very hard.  It is nice to be appreciated.'
Being a hot old day, I gave Njage a glass of water, then he left.

He's just called me back from somewhere down the road.  Our phone line is back on - for the time being anyway...