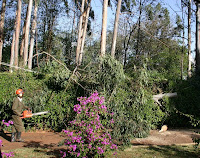 My friend yesterday morning was telling me that she was having a bad day. I felt for her, but had to admit that mine was going fine.

There was a small hiccup when I got to school/kindergarten at nine. The school was closing for the Christmas break that day. First I asked how the Kenyan teacher's food collection had gone for the Special Needs day-care centre that she volunteers at in her spare time. She said lousy - 'in spite of written reminders going out to parents, I've had very little.'
Damn, I thought.

She said, 'I've now had to split up your hamper so that it can go around further, help more parents.'
Then I asked the headmistress how the collection was going for the recently widowed caretaker and she also said lousy.

'We've only collected 12,000 and it's going to cost him 100,000 to transport his wife's body upcountry to be buried.'
Double damn. I felt annoyed as I had put in 2,000 of the 12,000 myself.
'Make sure you mention it at the end of the carol service I said. Make the parents feel guilty. Perhaps they have simply forgotten?'

The Apathy! I thought - though I know I have been guilty of this many times myself. Fund raising is always a struggle whichever way you look at it.

At midday, the headmistress did mention the appeal again at the end of a very sweet carol concert. With the help of two other mums who stood at the narrow exit saying loudly 'donations please' to all the parents as they left, the school managed to raise 55,000 in total.

I also saw another parent carry into the school a big bag of food for the day-care centre. Perhaps it wasn't so bad.

By afternoon I was still feeling fairly smug. My day was continuing to go comparatively well until.... crash. Our neighbour's in-house tree cutter felled a giant eucalyptus through our hedge into our drive and worst.... straight through our power lines.

'It was the wind' he said sheepishly when I bellowed for him to come and see the damage.

'GRRRRR' I said, thinking, quite lucky no one was standing or driving underneath when it came down!
What I didn't bother to say was, 'perhaps when felling a 60ft+ tree single handed, you should be relying on a more exact science than wind direction.'

The neighbour's tree cutter quickly sliced the tree into pieces and with the help of many hands it was no longer blocking our access in and out of our house.

I winced and shouted 'hatari ya stima!' as I saw the fundi (who wore misleadingly professional looking ear defenders and hard hat) wield his chainsaw dangerously close to the live power cables. My husband said over the phone from the office,
'take photos in case of liability.'
Once no longer buried in foliage, the power lines sagged uselessly. One was completely snapped.

As I write, I do so to the hum of the generator which I ought to switch off - it's been on since dawn, after a very dark night. We've had no mains power since yesterday afternoon and have had no success in trying to contact the owners of the next door property - who we were certainly hoping to have received an apology from by now.

Now we are at the mercy of KPLC (Kenya Power and Lighting). Fingers crossed that they come today with new cables as promised - but whether they do or not is anyones guess.
......As a post script to this - I must admit, KPLC acted very swiftly and a team of six men reconnected us by lunch time.
After giving them all tea and jam sandwiches, they did say that they should, strictly speaking, have charged us a call out fee+labour+cost of new cable etc. But would let us off this time. Our neighbours finally returned from where ever they were and were extremely apologetic.