That was it - literally! 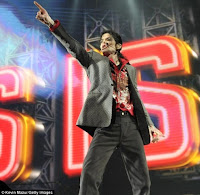 I went to watch the Michael Jackson movie on Saturday – on my own! It was the first time I’ve gone to the cinema on my own before. It felt a bit odd, but what happened was, I was about to drag the whole family with me, when it suddenly dawned – they weren’t remotely interested. Even the prospect of looking after and bathing three children appealed to my husband more than this particular flick. So off I trotted, hugging myself at my coup of ditching the family, having arranged to meet for pizza later and then on to two hours of uninterrupted Wako Jacko. If you’re not a fan, probably best you don’t read on or you might vomit...
For the first fifteen minutes I must admit, I felt like crying. A hard old cow in real life, I always, unexpectedly, find myself crying in films. I think I was caught off guard as I hadn’t expected to see Michael Jackson still being so utterly brilliant.
We’ve been reading so many stories in the press about how the tour would never have happened, that he wasn’t rehearsing, he was ill, that he couldn’t dance any more. In fact he was far from washed up at this point. The reality was that yes, he was so painfully thin that his hands and feet looked huge, and his clothes hung off him but also there was still the incredible voice and tons wonderful and entirely improvised dance moves, all of our favourites. His dancing was the best and brought tears to my eyes (non-jacko fans – I did warn you!). I even found myself digging his odd fashion style, layered shirts over t-shirts, funky jackets, big slip-on shoes (OK the silver jacket and skinny red jean combo was well dodgy) but he carried it all off – odd, distorted plastic surgery face or no. In the movie he looked less odd than in the images we’ve seen in paparazzi photos of late. Having said that I did find myself wondering if indeed his nose was fake (there was that rumour that in the morgue he didn’t have one). I took note that when he sung the words, ‘Did you ever stop to notice...?’ he was actually saying, ‘dotice’ but I couldn’t believe that his nose might have been detachable.
The movie showed that in the rehearsal auditorium, the show’s crew gave him a standing ovation time and time again. Michael Jackson was a joy to watch, encouraging everybody else around him to do their best. Also an incredible solo performer. I was impressed by how involved he was in all the details, the music, special effects, dancer’s moves - tweaking things slightly to get them to have maximum dramatic effect. It seemed he was fully committed to doing those shows and the fact he never got the chance was a tragedy – though I do wonder if he would ever have really managed 50 dates. Unlikely. It was sad he has been in retirement for the last ten years because, frankly, we all forgot how good he was.
My own small disappointment that he never embarked on a tour that I would never in a million years would have seen, must be a tiny, tiny glimpse into what the show’s producers and performers must have felt. I guess they locked themselves in their rooms and cried for a week. The dancers, technicians and musicians were all huge Jackson fans who felt they were being given the chance of a lifetime. The costumes (Swarovski crystal encrusted suits etc) and special effects would have been legendary. The film gave us an idea of what we missed out on. Hey Ho. At least he died during a time when he was busy doing something he loved.

Labels: film review, Michael Jackson, This is it