Phew - the party's over

Since my middle daughter went off to big school in September knowing absolutely nobody in her year group, I wanted to get lots of kids over for her seventh birthday to sort of launch her socially, get her on the map – as a sort of ‘debut’ if you will - her being the debutante of course.
As the invitations went out a week ahead of time, my daughter endured seven days of ‘why haven’t you invited me!?’ from the boys, followed by, ‘I am definitely not going to invite you to my party now!’ – but inviting the whole year group would have meant 40 kids, so I had made the executive decision on all girls. As it was, we ended up with 22 kids, which was more than enough.
Last week things were not looking good. When I rang the usual party entertainer/magic man/clown he said that I was too late, he was already fully booked. In a flash of inspiration I remembered that the grounds-man at the kindergarten had pressed a DIY business card into my hand at the end of last term, saying ‘I am branching out into party entertainment in my spare time’. A bonus was that my daughter knew him well, as last year he sometimes helped out with football training, so when I asked him and he said he was free – it was a done deal.
Alarm bells started to ring when later I asked,
‘what do you think you will bring, what games shall we do? What can I provide by way of props?’
and he said, ‘I think I am going to think of some very good games for you.....’
Our conversation sort of trailed off after that. I didn’t ask, but it was dawning on me that this might have been his first ever party booking.
~
Having only just been thrown together in September, the 22 party guests were not really what you might describe as ‘friends’. The beginning of the afternoon was pretty awkward as the children failed to bond. One six year old girl arrived from the car park talking on the phone to her Mum with an ayah trailing behind.
‘Mummy – I don’t want to stay here’ she was saying, shaking her head. I could hear the mum on the other end of the line saying, ‘give it five minutes’.
We kicked off with ‘make your own party hat, painting, sticking and gluing’, but as some kids lost interest and began to torment the guinea pig and baby tortoises, I gestured frantically at our ‘entertainer’ to please leap into action.
He managed to get some girls to agree to play a game, so relieved; I rushed inside to help with the mass production of homemade pizza going on in the kitchen. When I emerged the girls were balled up on the ground, screaming, pulling hair and trying to grapple a single football from one another in a sort of impromptu rugby scrum. The ‘entertainer’ was blowing his not very loud whistle ineffectively.
‘Stop stop!’ I shouted, adding diplomatically ‘Not this game I think!’
A couple of mums were on our veranda and four ayahs were sitting with legs straight out on rugs on the lawn. All had decided to stay and literally sit the 4 hour party out, so under their watchful gaze I had to try to keep my cool.
‘Something else?’ I implored then handed the party games man a bag of sweets for prizes which helped on the old enticement side, unless of course he put the bag down and then another rugby scrum ensued for free sweets.
I must admit, after a shaky start, the entertainer saved us. When I spotted my husband reclining, relaxed on a director’s chair, I hissed pointedly, ‘he’s doing your job!’ but then looked on pleased as our party guy finally got the girls sitting in a circle playing ‘duck, duck, goose’, which was much better. A few kids carried on sticking and painting all afternoon. I later got covered in paint while stapling the globby hats together, but that worked out well. The kids all had lunch on laps on the grass.
Later, (before popping out to buy paper plates) my husband put on a ‘wear –em out’ treasure hunt that involved lots of running, a drinks break and getting scratched by thorns as my husband guided them around while riding his bicycle. One girl, however, I could not coax off the tyre swing to participate.
‘There’s real treasure at the end!’ I promised in my most exciting voice.
‘Oh, I’ve got loads of that Nakumatt chocolate money at home,’ she said.
There was a lot of clock watching on my part (only 3 more hours, 2 more hours, one and a half, three quarters of an hour etc.). Grandad did the barbeque before trying to slope off for a snooze (only sadly for him the dogs were locked in the spare bedroom and they were whining and scratching to get out) and Granny iced fairy cakes, cut slices of pizza and worked like a Trojan all afternoon.
At one point I walked out to give our gardener a plate of pizza and sausages to find the parking area full of drivers snoozing in their vehicles (at least six). All you could see were pairs of socks sticking out of rolled down windows. I rushed back inside and found pizza for them all too, which they quickly roused from their slumber to gratefully receive. 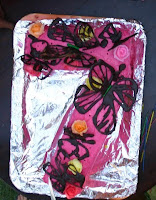 The cake turned out OK, but working with those homemade melted chocolate butterflies was a trial, plus I didn’t mean for it to be quite such a Calpol pink, but my hand slipped with the red colouring.
In the end there were JUST enough party bags handed out importantly by my four year old.
We then collapsed in a heap. I sort of spoiled it by saying to the birthday girl at bedtime, ‘that’s the last big party I’m doing!’ as she whinged for the millionth time about having collected a thorn in her foot on the treasure hunt. Oh dear. Nobody’s perfect.
Without advance notice, my husband went ahead and bought the birthday girl a full size set of drums - which has been a big hit - and perhaps not something I would have chosen.
Yesterday my husband and I had the lovely job of clearing the blocked downstairs loo.
(p.s. since my parents-in-law got back from a trip visiting friends there was a terrible smell in their bathroom. There had been a lot of soul searching on the matter, but just last night my MIL found a dead gecko nestled in the spare loo roll basket, which was definitely the culprit.)