It's Our Turn to Eat 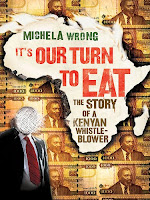 I just finished reading ‘It’s our turn to eat’ by Michela Wrong. It’s a brilliant book and all the more fascinating for being so current, covering ground from the 2004 election where Mwai Kibaki was first sworn in and so eloquently promised that corruption would be a thing of the past, to the aftermath of the disastrous 2007 vote. The machinations of the ‘Mount Kenya Mafia’ who are described as shamelessly pilfering vast sums of money and holding onto power by their bloody fingernails are shocking. The fact that the economic boom in Kenya over the past few years has failed to trickle down to the poor was pointed to by Michela Wrong as a fundamental grievance and destabilizing factor at election time. The average Kenyan now pays an average of x60 bribes per month.

I was also horrified by reading about the complicity of the World Bank and Dfid (the latter who I worked for briefly as local hire staff) in continuing to hand over ever increasing amounts of cash while turning a blind eye to corruption scandals that were flaring up in local Government left right and centre. Tony Blair’s celebrity studded commitment to ‘Saving Africa’ (probably a popularity bid staged to detract from an unpopular the war) came at a time when a few brave souls were beginning to seriously question Kibaki’s will to fight corruption. After a brief honeymoon period, where every Kenyan felt there would be real change, it turned out that the President had no intention of healing old wounds, instead he allowed the continuation of scams thought up in Moi’s era and these scams were taken to an even new level of audacity.

The fundamental problem seems to be that in aid organisations, where success is measured by sums of money spent, targets reached, number of projects off the ground, no one wanted to listen to bad news. When John Githongo went public with the Anglo Leasing scandal, nobody with the power to do so acted.

I vividly remember Claire Short visiting our Dfid offices in Dar es Salaam in 2000 and haranguing a young Oxford graduate for still having 5 million in the bank when it should already have been spent in the Tanzanian education sector.
‘I haven’t been able to get hold of the minister’ the graduate complained.
‘Don’t give me excuses!’ she shouted, ‘give me results! That money should not still be in the account, get on with it! It’s a disgrace!’

Michela Wrong very clearly questions this approach – asking, what about accountability? And, is this financial ‘help’ in fact a hindrance to the country’s governance? She points to the fact that while foreign governments make vast pledges of money to Africa, they are left with a choice of very few countries to pour their aid into – this is due to the fact that so many African countries are in a mess. In 2004 the the aid giving community wanted to believe that strategically important Kenya was the great hope of democracy in Africa and kept upping the amounts sent here. She described a monkey with its hands clasped over its ears, refusing to listen to the truth when corruption scandals were revealed.

The funniest irony in the book is when Michaela reveals that the World Bank directors’ traditionally rent their ambassadorial house, even share a compound, with President Mwai Kibaki and see nothing odd in this! Very cosy. She writes not only about John Githongo's frustrations but also of Edward Clay's and other small fish who could see that something at the top was very wrong.

The end of ‘It’s our turn to Eat’ the book gives a somewhat bleak outlook on the future of democracy in Kenya, but in my humble opinion, I think that there is a bit of a wave of change washing over the government at the moment. Also, I think that this book must have brought about at least a part of this change. The fact that corruption scams are out in the open and well documented means that foreign governments, in spite of their broad aid promises, have been forced to wake up and smell the coffee. They can no longer veto huge sums of money coming into the country in the face of such grand theft in Government. Plus there is now wide concern over how the 2012 election will turn out if old grievances and old crimes continue to be swept under the carpet.

In the past week, an ineffective Aaron Ringera has been forced by Parliament to resign as head of the Kenya Anti Corruption Council, in spite of Kibaki trying to overrule the system and keep him there for a second term. The chief of police, Hussein Ali, blamed for sanctioning extra-judicial killings in the police force, has been reassigned to the postal service.

Plus international pressure is piling on the Government. The US and UK have placed visa bans on fifteen to twenty MPs and officials who they deem are standing in the way of necessary reforms. The EU are threatening sanctions. Kofi Annan, chief mediator in the election crisis, is now in Kenya to meet with Kibaki and Raila and discuss why implementation of the ‘National Accord and Reconciliation Act 2008’ signed by both sides of the Coalition Government just after the election has thus far failed. The final International Criminal Court deadline for setting up a local tribunal to try perpetrators of post election violence has lapsed – so now the dreaded Morena Ocampo of the ICC is expected to swoop in and begin his investigations any day. To me, being an optimist, it feels like the winds of change are blowing. It seems that the old guard is under siege.