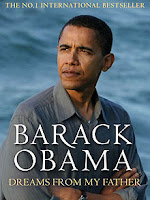 Finally finished reading 'Dreams from my father' - should probably have got around to it years ago. I enjoyed it enormously - though I must admit that while reading the middle section 'Chicago' and what he curiously called 'organising' I was willing the action to move on quickly to the 'Kenya' bit.

I loved reading about Obama's boyhood in Hawaii and Indonesia at the beginning section called 'Origins'. I am now officially an Obama groupie. His mum was obviously hugely influential and a strong character then, driving him on to be a good person and work hard in his studies- though he doesn't really go very deeply into his long term relationship with her, or question any of her perhaps fairly wacky choices in life. It felt almost a bit intrusive to be reading all about the hopes and personal history of USA's current president, even though you as the reader are always kept slightly at arms length.

My impression was that there was a lot in what Barack Obama (or 'Barry' as I now know him) did not say. I suspect he was pretty diplomatic about his relationships with people throughout the book, erring on the side of caution by resisting an urge to make judgements. He is obviously observant and very interested other people's stories, as much of the book's content is made up of these kind of examples.

As I said, he did not say much about his mum - but it was interesting how he embraced the black side of his heritage and almost rejected the white. He did not say anything negative about his experiences in Indonesia or Chicago or Kenya, he just seemed to take things from each place and learn from them. Anything negative came through the voices of others - the disappointments of his grandad, his stepfather and his Kenyan step sister Auma etc.

He said he had an upset stomach in Kenya once, but did not express that there was any kind of culture shock ie. in how different it might have been to sleep in a very basic shelter upcountry with his granny or what the funny food would have been like. No mention of discomfort at all really. It was interesting to read about the expectations families in Kenya have of one another. The relatively successful family members are honour bound to help and 'carry' the less well of as a matter of duty, which means that you are born into a web of responsibility that can be very restricting.

Anyway - overall thought it was fascinating. I loved the explanation of how in Kenya you are deemed to be 'lost' when a friend or acquaintance has not seen you for some time. I have come across that expression a lot. 'You have been lost!' the lady in the fruit and vegetable shop said after we got back from England last week. 'Where are your children - they are lost? I have not seen them for so long!' etc. At the end there were fascinating passages on Kenya's history, colonialization and subsequent independence interpreted through the experiences of Obama's grandfather and father. Lots of food for thought. What did you think?

Hillary Clinton is here in Kenya, arrived yesterday to kick off her 7 nation Africa tour. I think that the news headlines today are 'Raila says stop preaching to us about democracy! Let's focus on how the US can help Kenya' or words to that effect.

(the photos are for the comment I received below re: Hillary having her hair done by a Kenyan hairdresser on arrival...) 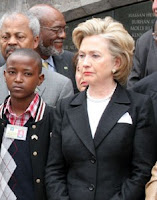 Next on my booklist: 'It's our time to eat' Michela Wrong.