Sweatshops. Make sure you recycle, but why feel guilty? 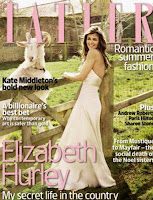 My friend lends me her copies of Tatler every month, bless her. It costs a fortune here but she gets her mags from the UK via a secret source. I have never told her, but while I cannot resist flipping through the scented pages, the glossy magazine is enormously depressing to me. It’s the dreadful society pages that get me down the most – ‘move on’ I feel like screaming, ‘we no longer live in the 1940s!!’ ‘Who cares who you are or where you are partying?’ Mr this and Ms that. Plus, who really wants to hear about how Liz Hurley finds living in the country sexy, slewed over eight pages wearing Hunter wellies and evening dresses. Really!

Anyway, I admit I do read the mag (desperate for reading fodder in Africa but would never hand over money for it) and in the June issue I hit upon an article entitled ‘An inconvenient Truth’ by Helen Kirwin-Taylor. She wrote a page on ‘moral disengagement’ with reference to fiddling expenses, political smear campaigns, Bernard Madoff and the like – and the fact that we can all slip into committing the same crimes albeit on a smaller scale. One point she made grated and sparked another Expat Wife style diatribe I’m afraid,

‘A report by Harvard Business School suggests that moral disengagement is not just the prerogative of Nazi prison guards. Every time we buy a pair of jeans made in sweatshops (which would once have made us ill). We are – morally speaking – teetering on the edge.’

The raging debate on sweatshops seems to me to be akin to the favourite bugbear topic of mine ‘food miles’. Sweatshops have been an unsavoury reality since the rise of globalisation but I’m afraid I really don’t see why you should feel guilty buying cheap clothes from sweatshops, and here’s why...

It’s funny how, during a recession, the moral high ground takes a bit of a beating because, frankly, no one can afford to keep it up. As sales of expensive local/organic foods from farmer’s markets tapers off let’s hope that shoppers are returning to the purchase of ‘cheaper’ Kenyan beans (better for Africa who, let’s face it, needs all the help it can get at the best of times).

Living in a developing country for ten years gives you an altered perspective to those who live in the West whether you like it or not. The disparity of wealth here is crystal clear. There are constant reminders and no escaping it. A friend’s employee gardener died of AIDS recently. She helped sort out his personal possessions that were left at her house for his grieving widow; a broken mirror, an old comb, some dirty overalls, a plastic bag with chapattis inside. Scales fall from your eyes as you witness hand to mouth living in such difficult circumstances, that you would never have believed could exist in the 21st century, but that is how it is. Fact.

I won’t aggravate everybody by saying I am blatantly in favour or sweatshops, – but just want to point out that it is hardly a cut and dry topic. I don't agree with unfair working hours, contact with harmful substances. low wages, lack of health and safety but in developing countries working in sweatshops offers a way out of the following;- starvation, back breaking subsistence farming, unemployment, stone breaking, rubbish picking, street hustling or prostitution - to name but a few unsavoury alternatives that are sources of employment for millions here.

Often foreign owned companies pay substantially higher wages than locally owned firms. Of course I don’t condone child labour when that issue rears its ugly head, but isn't earning a wage better than child prostitution, rubbish picking or death? Sadly, you only need to look about you in Africa to see that school is not a viable option for all children – I only wish it was. The day of the African child (16th June 2009) estimated that 38 million children of school going age are out of school in Africa.

It’s easy to get on a high horse and say;
‘Oh, but it should be like this in Africa; schooling for all and everybody earning a higher minimum wage – otherwise it’s not fair or just.’

OK, yes, in an ideal world I agree, but the fact is that if a global company can offer a source of reliable employment in the tricky environment of a developing country, overcoming inherent problems of bureaucracy and corruption, then surely the perceived 'sweatshop' is better than no job being available at all?

Below, I am shamelessly taking an extract used in another blog ‘The Economist’s View’.

In Praise of the Maligned Sweatshop, by Nicholas D. Kristof: Africa desperately needs Western help in the form of schools, clinics and sweatshops. Oops, don't spill your coffee. We in the West mostly despise sweatshops as exploiters of the poor, while the poor themselves tend to see sweatshops as opportunities. ...
On a street here in the capital of Namibia, ... I spoke to a group of young men who were trying to get hired as day labourers on construction sites. "I come here every day," said Naftal Shaanika, a 20-year-old. "I actually find work only about once a week."
Mr. Shaanika and the other young men noted that the construction jobs were dangerous and arduous, and that they would vastly prefer steady jobs in, yes, sweatshops. Sure, sweatshop work is tedious, gruelling and sometimes dangerous. But overall, sewing clothes is considerably less dangerous or arduous — or sweaty — than most alternatives in poor countries.
Well-meaning American university students regularly campaign against sweatshops. But instead, anyone who cares about fighting poverty should campaign in favour of sweatshops, demanding that companies set up factories in Africa. ... [T]hat would fight poverty far more effectively than any foreign aid program. ...
The problem is that it's still costly to manufacture in Africa. The headaches ... include red tape, corruption, political instability, unreliable electricity and ports, and an inexperienced labour force... The anti-sweatshop movement isn't a prime obstacle, but it's one more reason not to manufacture in Africa. ...
So companies like Nike, itself once a target of sweatshop critics, tend not to have highly labour-intensive factories in the very poorest countries, but rather more capital-intensive factories ... in better-off nations like Malaysia or Indonesia. And the real losers are the world's poorest people.
Some of those who campaign against sweatshops respond ... by noting that they aren't against factories in Africa, but only demand a "living wage" in them. ... One problem ... is that it already isn't profitable to pay respectable salaries, and so any pressure to raise them becomes one more reason to avoid Africa altogether. ...

I would say DON’T feel guilty about buying clothes from sweatshops – but DO feel guilty if you discard the item thoughtlessly without getting any wear out of them. DON’T buy too many clothes, and if you have to buy then DO recycle them (never just bin them).

This way, your hardly worn clothes may end up in Africa’s mitumba (second hand) markets. The mitumba trade is a major, job providing industry here, making fashionable clothes affordable to the masses when forty years ago, many people in East Africa had to go without clothes at all. Oh, it’s all just such a far cry from the pages of Tatler isn’t it?!