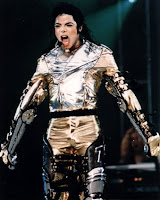 I was hoping that they might play Michael Jackson at our evening aerobics class, but instead it was only African Lingala music blasting very loud. Laban the instructor said he forgot, but we would do a tribute next Friday.. The reaction here has been much the same as elsewhere in the world I think - sad but resigned. They have not announced a national holiday here yet...(i.e. a la 'Obama Day' etc. - any excuse!)

It very sad that Michael Jackson has gone (prematurely, in true legend fashion) - but he has been off the scene for so long that it is a strange feeling today. It makes you feel retrospective, almost kind of homesick. His greatest music represents points in my adolescence - 'The girl is mine' I loved when I was about the same age as my eldest daughter is now, rugby club discos at 16 and buying the 'Dangerous' album on double tape at university and loving it - having to justify loving it too cooler goths (though I have to admit it was a bit schmaltzy compared to his previous stuff). His music is so fab for dancing. 'I just can't control my feet' - I was up there every time.

He was brilliant - but I have to admit that he hasn't been played on my ipod much lately.

He was hailed for truely 'crossing over' from black to white, transcending gender - becoming a worldwide mega star - the like of which is apparently a dying breed these days. Ironic then that he was born black then died a white man. I wonder what will happen with his children?

When I expressed an interest in going to the Michael Jackson concert in UK, my husband secretly investigated, but then told me our holiday dates did not fit in with his tour (would never have got tickets anyway). They said on the BBC radio that Google searches on 'Michael Jackson' were in so many billions at one time that they almost jammed the worldwide system - at one point Google apparently suspected foul play - a plot to bring down their search engine.

Coincidentally, the kindergarten school play next week finishes with a finale of 'Heal the World' - very fitting. Our six and three year olds are wandering about the house singing it. MTV has switched into a permanent Michael Jackson tribute with the banner; 'Michael we will never forget you'.